The Château de La Cour au Berruyer, a former guardian of the forest of Chinon, dominates the village of Cheillé bourg, neighbouring Azay-Le-Rideau.

This former fortified castle was surrounded by a moat in the 13th century. It took on its current appearance in the 16th and 17th centuries with its mullions and large lantern windows, overlooking the Indre valley on one side and the main courtyard on the other.

The main courtyard contains a beautiful arcaded gallery from the time of Henry II as well as the old keep with a remarkable stone spiral staircase.

The carriage gate and the châtelet window still bear the mark of the old drawbridges.

The castle with its 3 salons and 10 rooms can be privatized only one week a year during the summer season.

« The Château de la Cour au Berruyer is not a simple vestige, but, thanks to a few flashes of light, a fragment of eternity ».

The Château de la Cour au Berruyer owes its name to its first known owner, Philippe Berruyer, one of whose sons, Gérard, was described as “high and mighty lord of the Cour au Berruyer” in 1170.

Their descendants succeeded each other for nearly five centuries and Philippine de Berruyer, on marrying Georges le Simple, Lord of Plessis-Alais, made the “Cour” the residence of one of the four fief guards of the forest of Chinon.

The hillside, overlooking the Indre valley and dominating the village of Cheillé, grouped around its church from which a vigorous oak tree rises, constitutes a strategic position of the first order!

In the 12th or 13th century, there was a fortified castle here, of which some elements remain. The most important of these, at the north-east corner, is a square construction, the base of which is pierced by archways with several oval loopholes with a circular opening for firearms, built above them.

Coming from the village, after having climbed the hill, you first walk along the castle wall, which has numerous stone cross bays and is separated from the road by a dry moat.

A little further back, a forecourt opens up through a semicircular gateway and a pedestrian door.

The châtelet then gives access to the courtyard of honour, a pavilion projecting from the surrounding wall, covered by a four-sided roof with a triangular pediment dormer on each side.

There were two drawbridges, one for the carriage gate, the two grooves of which frame a single-rail bay, the other with a single arrow for the wicket.

Side loopholes protected the moat.

The porch, which opens into the courtyard of honour through a large semi-circular arch, has a rare ceiling with rafters set at an angle between curved tufa stones.

THE MAIN BUILDING AND THE MAIN COURTYARD

On the walls of the ancient fortress stands a 16th century dwelling, lit by mullioned windows.

To the north, the castle had a building that was built around a square, which has now disappeared. There is still an enormous square tower, a real dungeon with a very slender roof, housing a stone spiral staircase of remarkable size.

This ensemble was redesigned in the middle of the 16th century. The attic is illuminated by the characteristic dormer windows of the period, with lintels decorated with circles and triglyphs, tympanum occupied by a man’s or woman’s head, all topped by a triangular pediment, framed by pilasters, now damaged and sometimes even destroyed.

To the south, a narrow wing forms a gallery with five semicircular arches, dating from the Henry II period.

This beautiful 15th century manor house, classified as a Historic Monument, is located in the forecourt of the castle.

It has a Mediterranean garden of lavender and white roses, olive and fig trees, overlooking the farmyard and an old 18th century barn.

This peaceful and historic place can be rented by the week as a gîte. 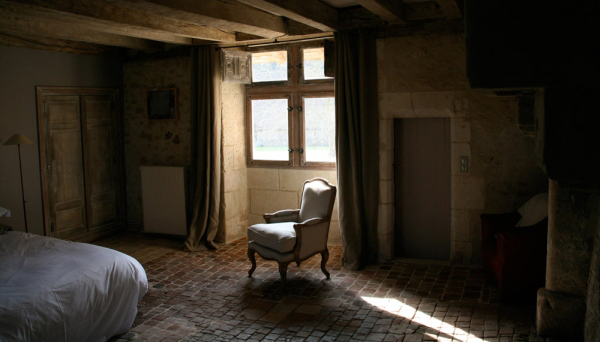 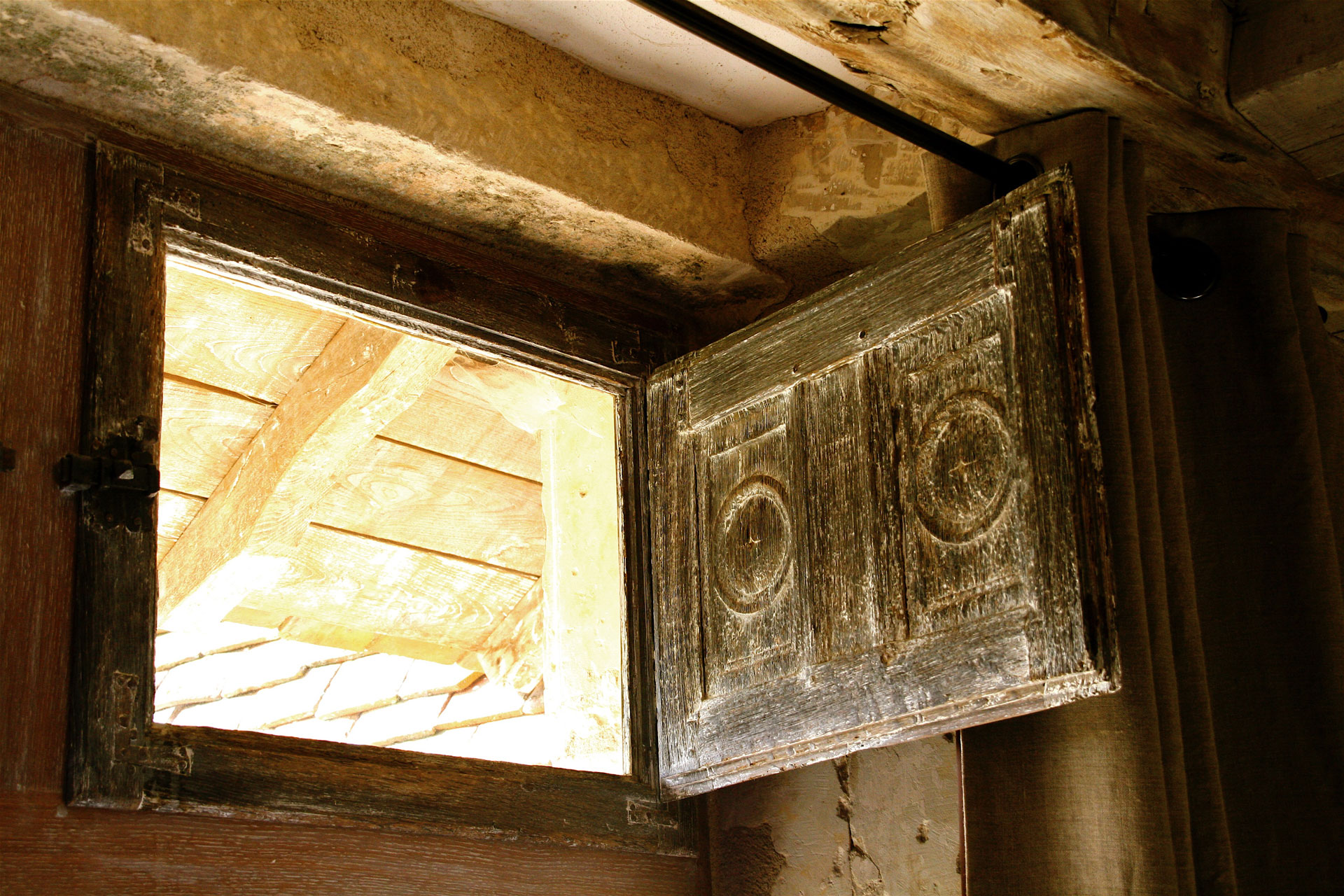 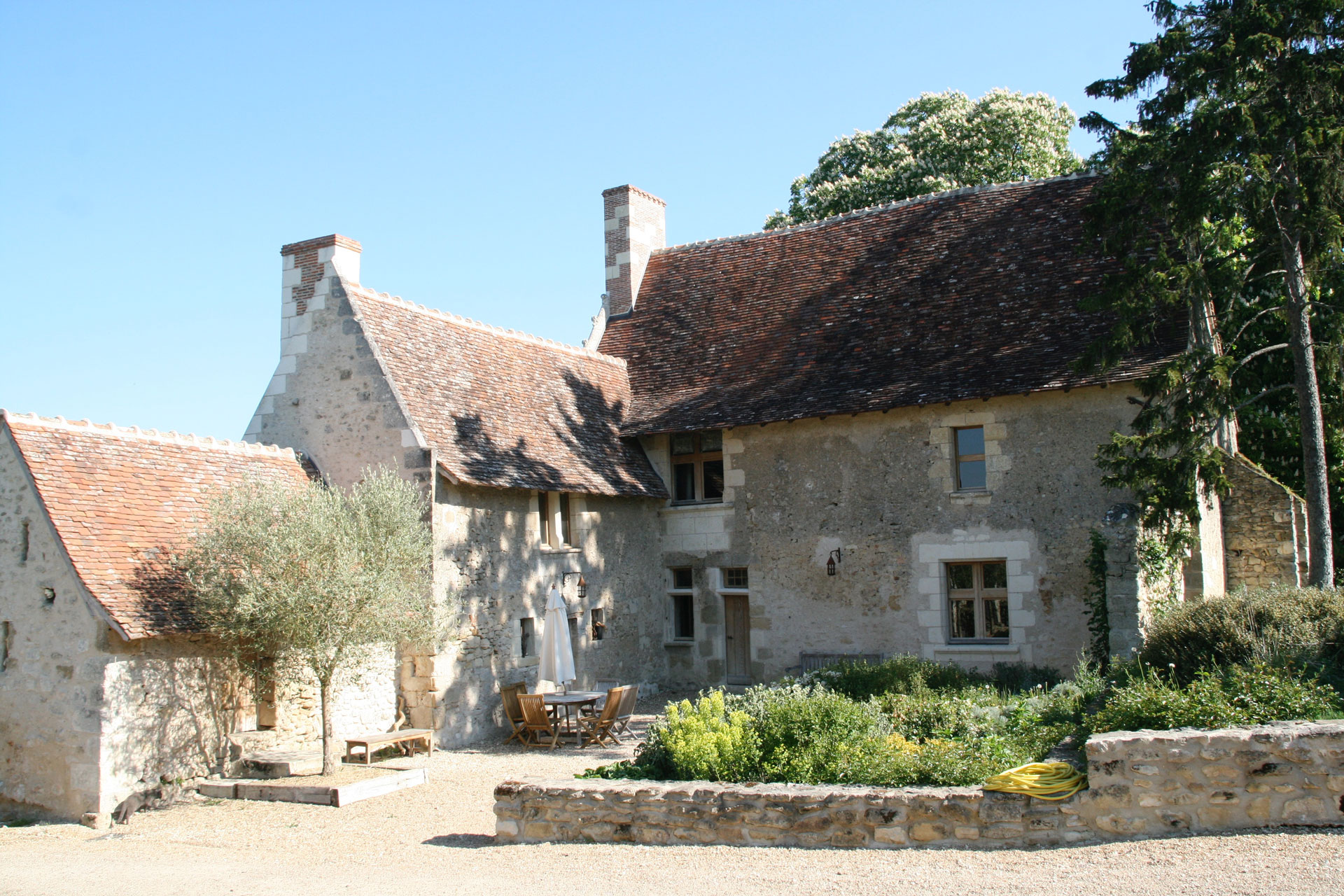 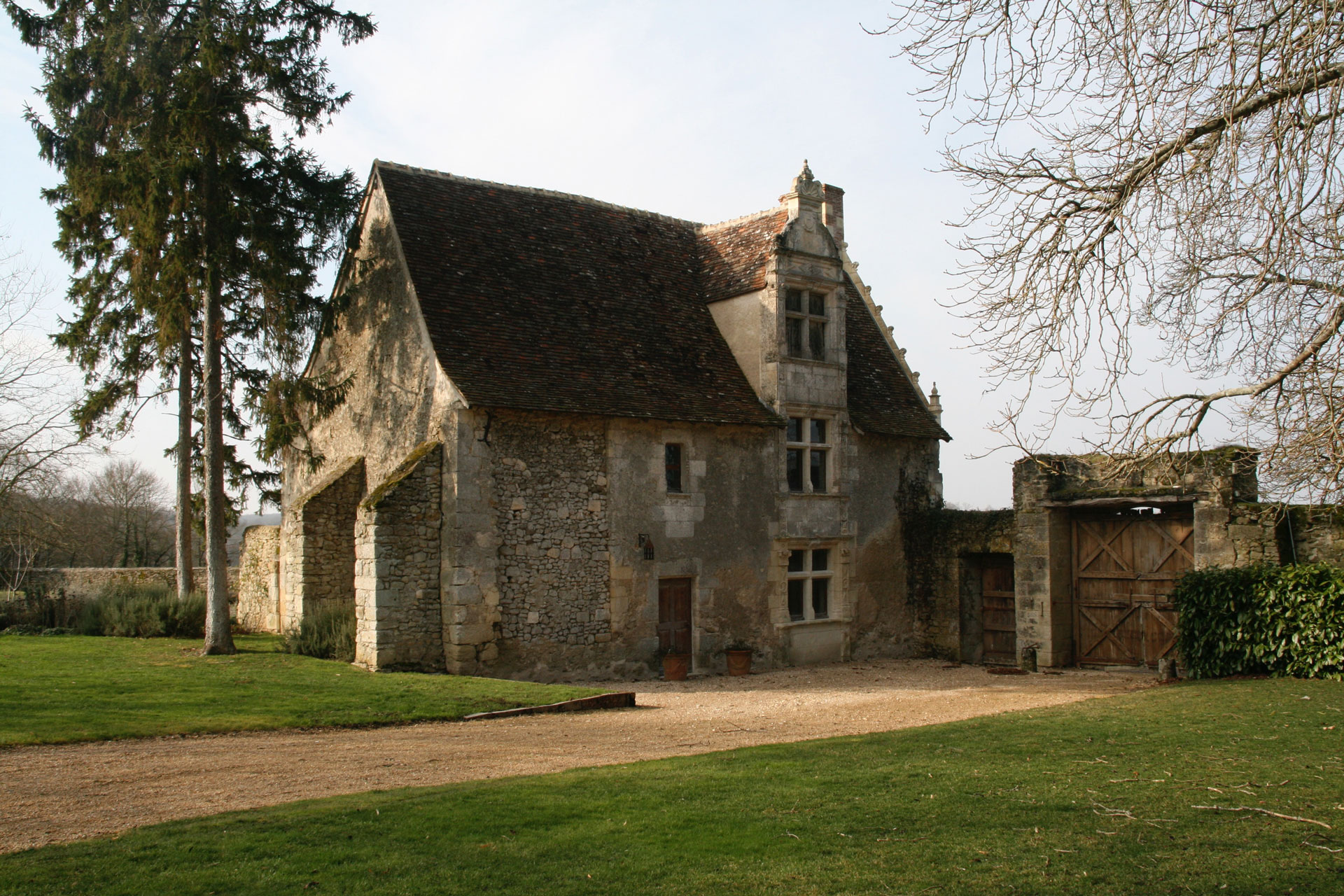 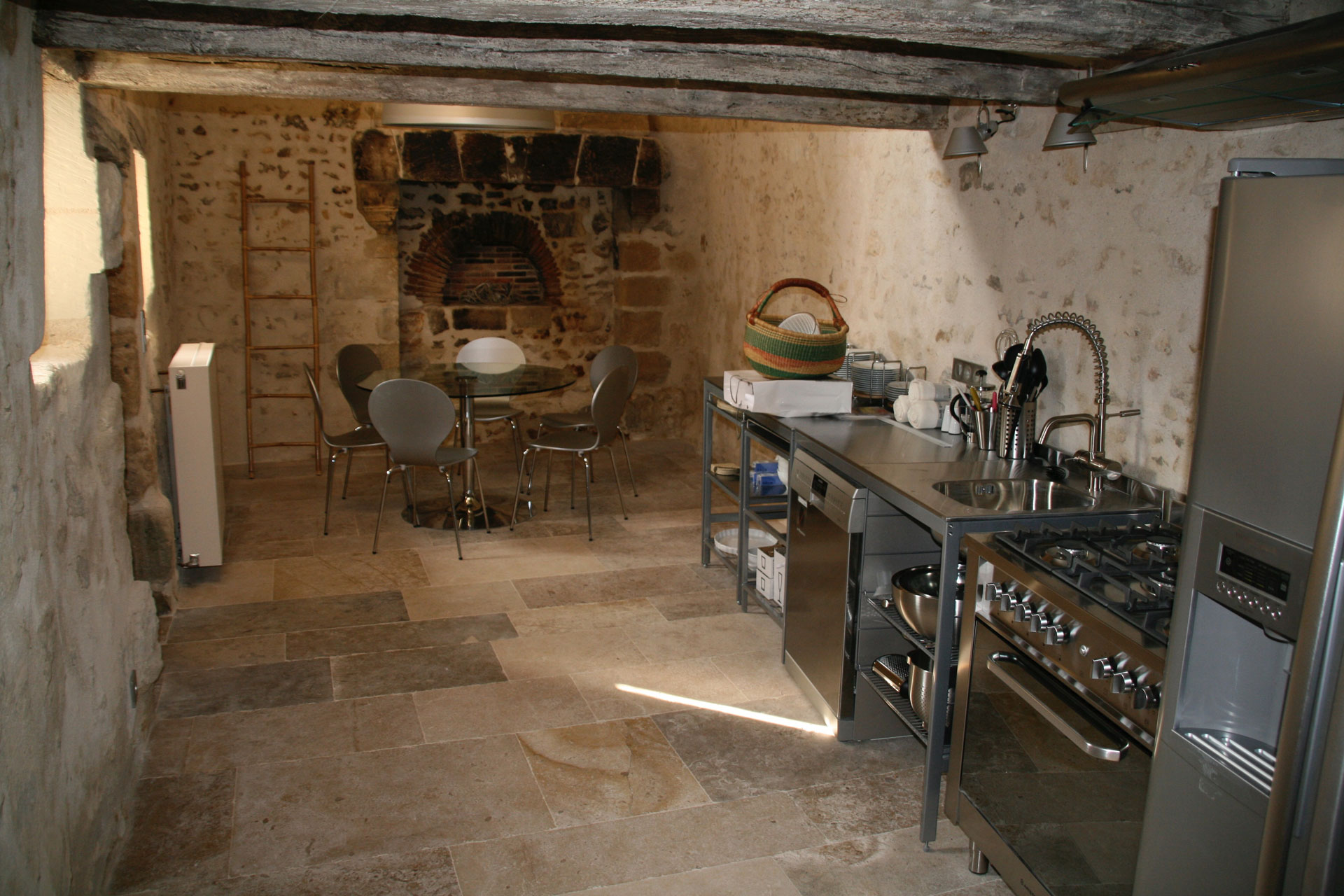 The art of living

Come and meet our animals!

In the park, the horse and the two donkeys (Zadig & Manga) brighten up the life of the castle.

« At the castle, we know how to receive » 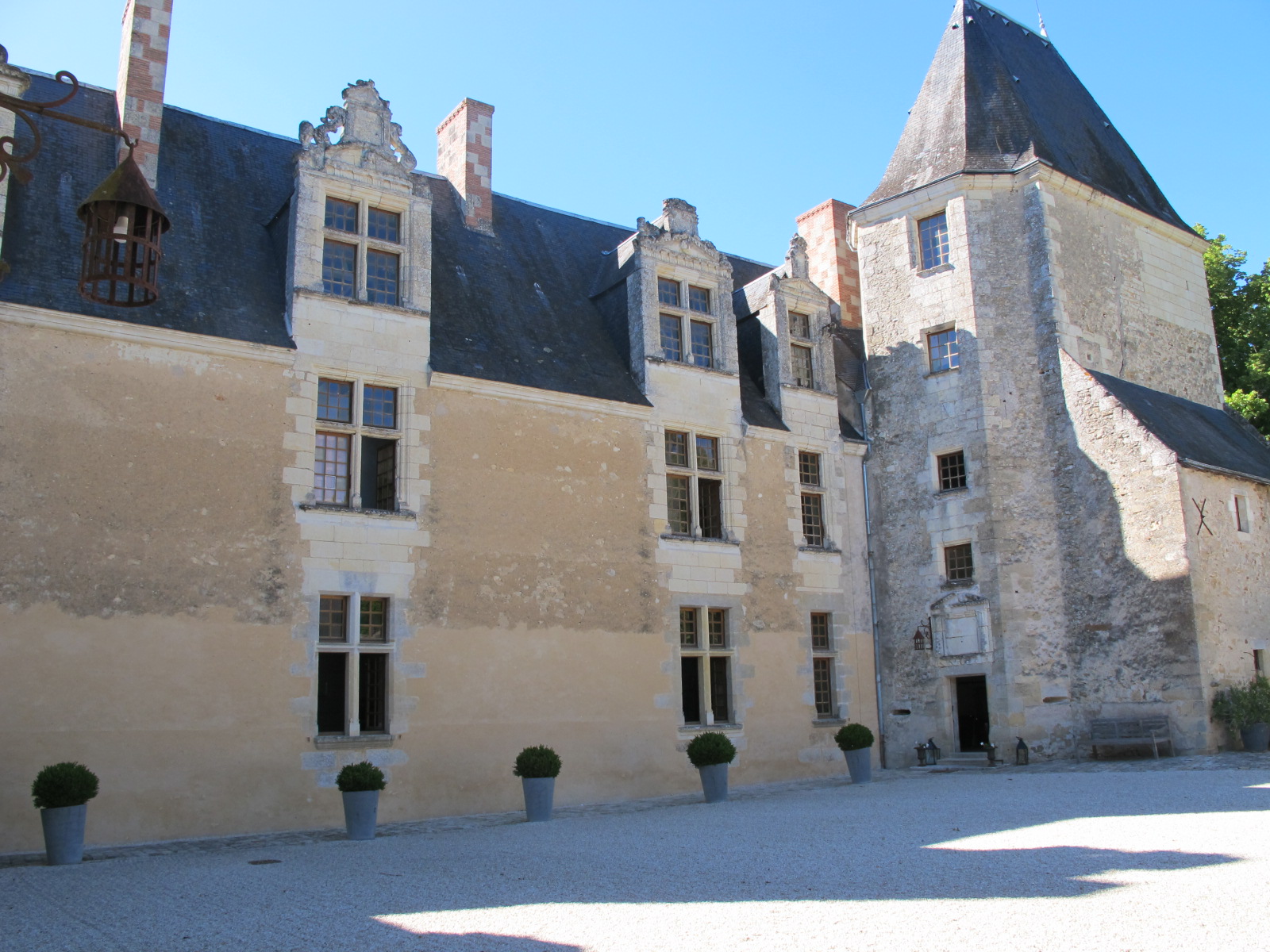 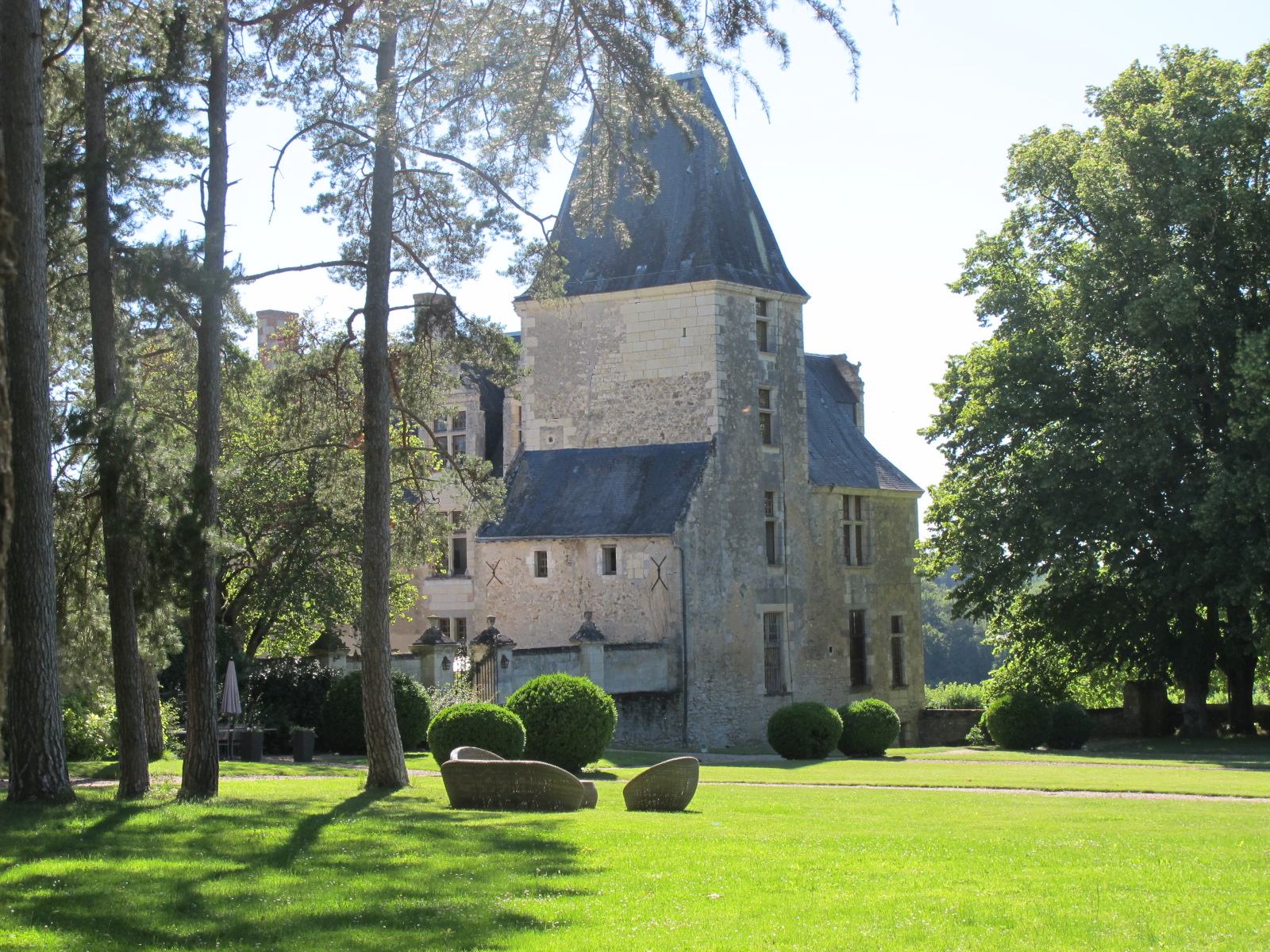 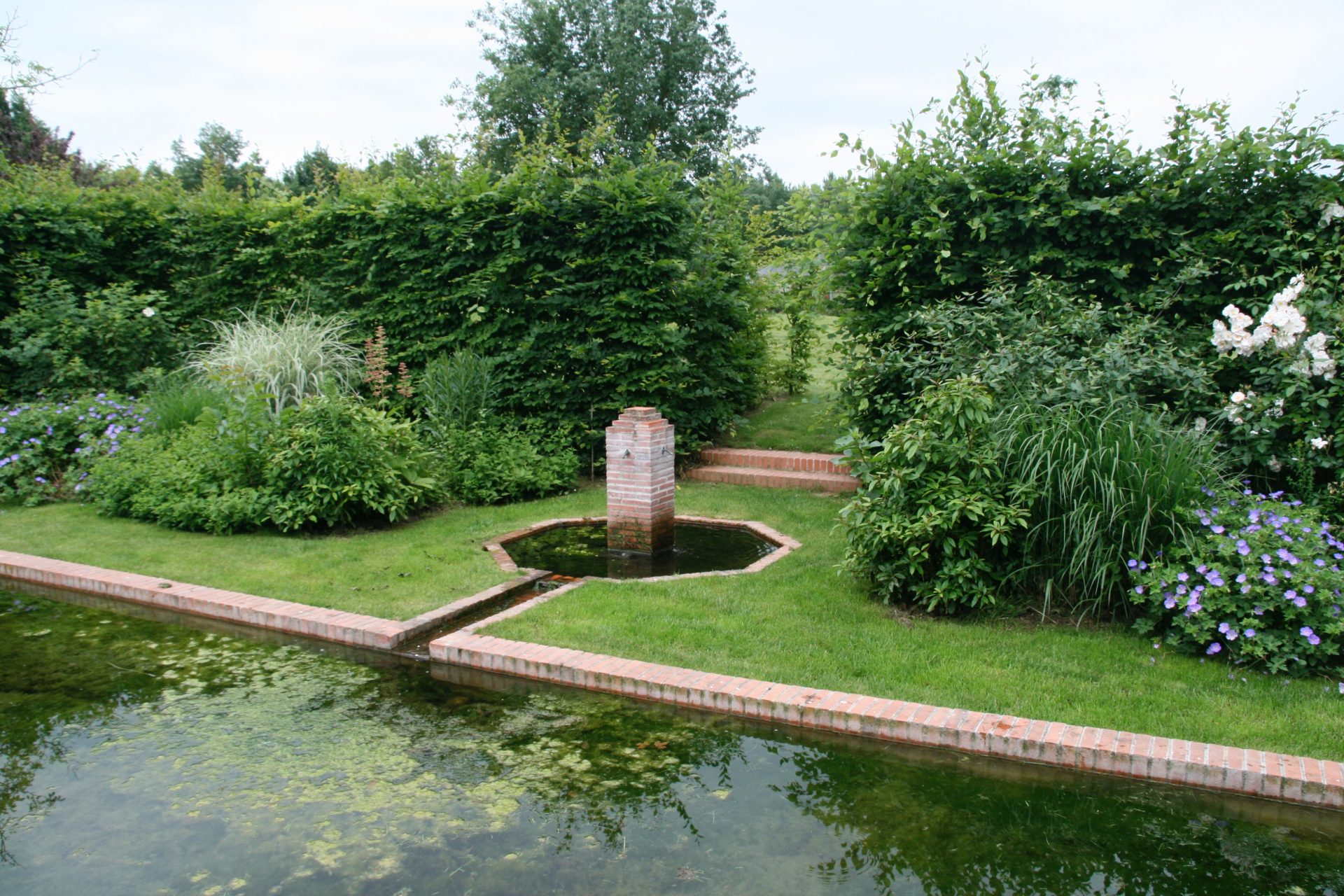 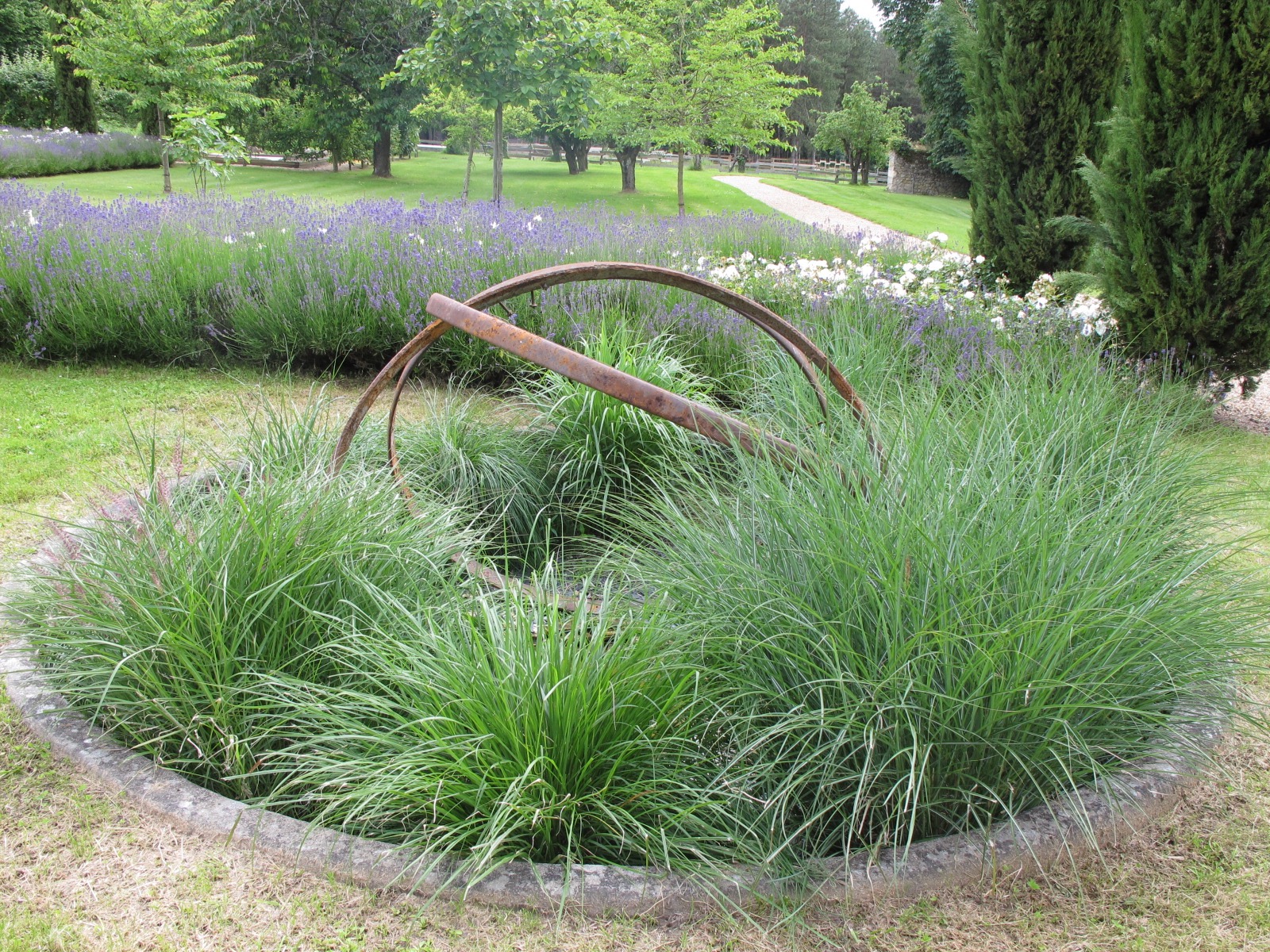 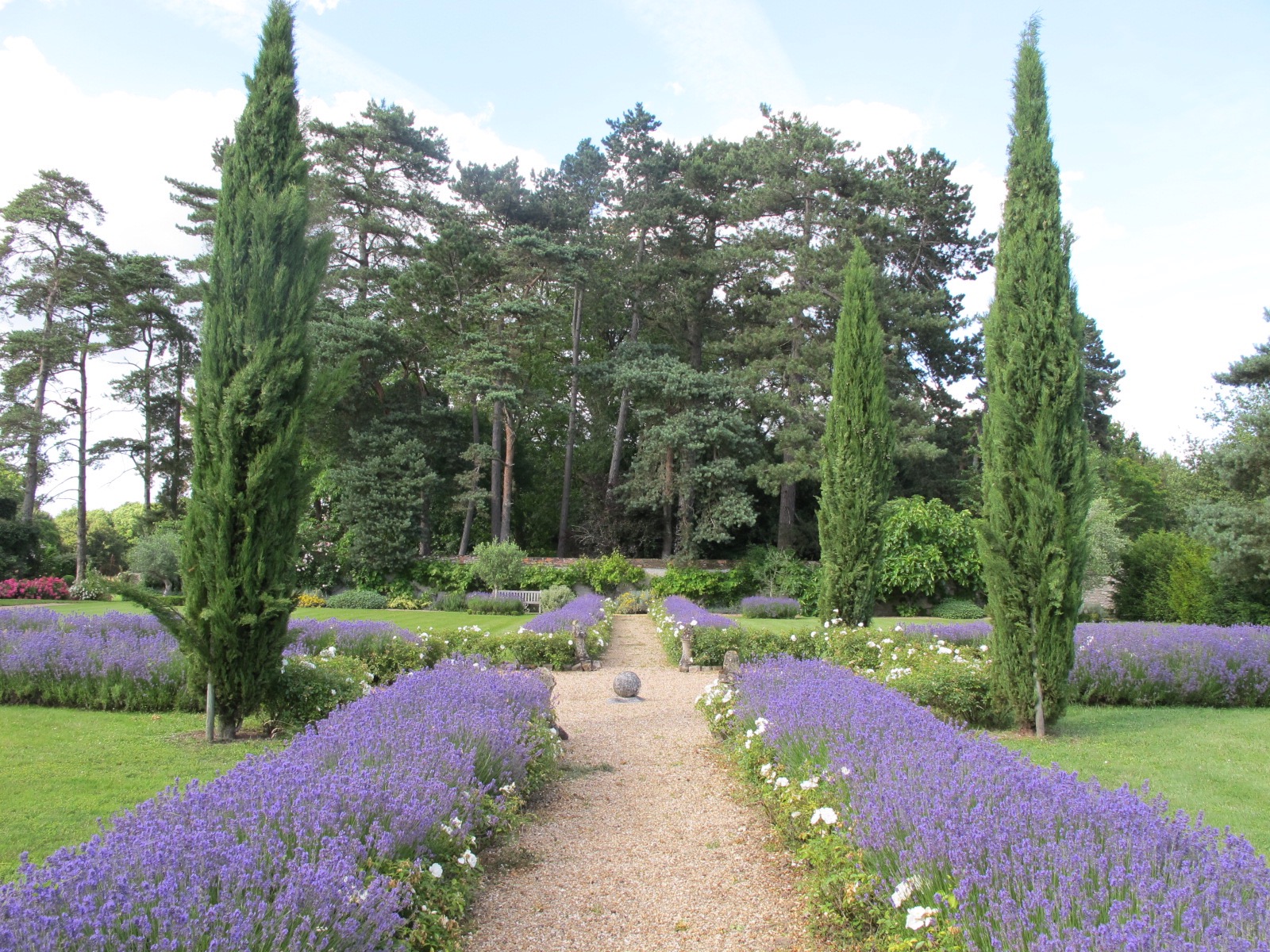 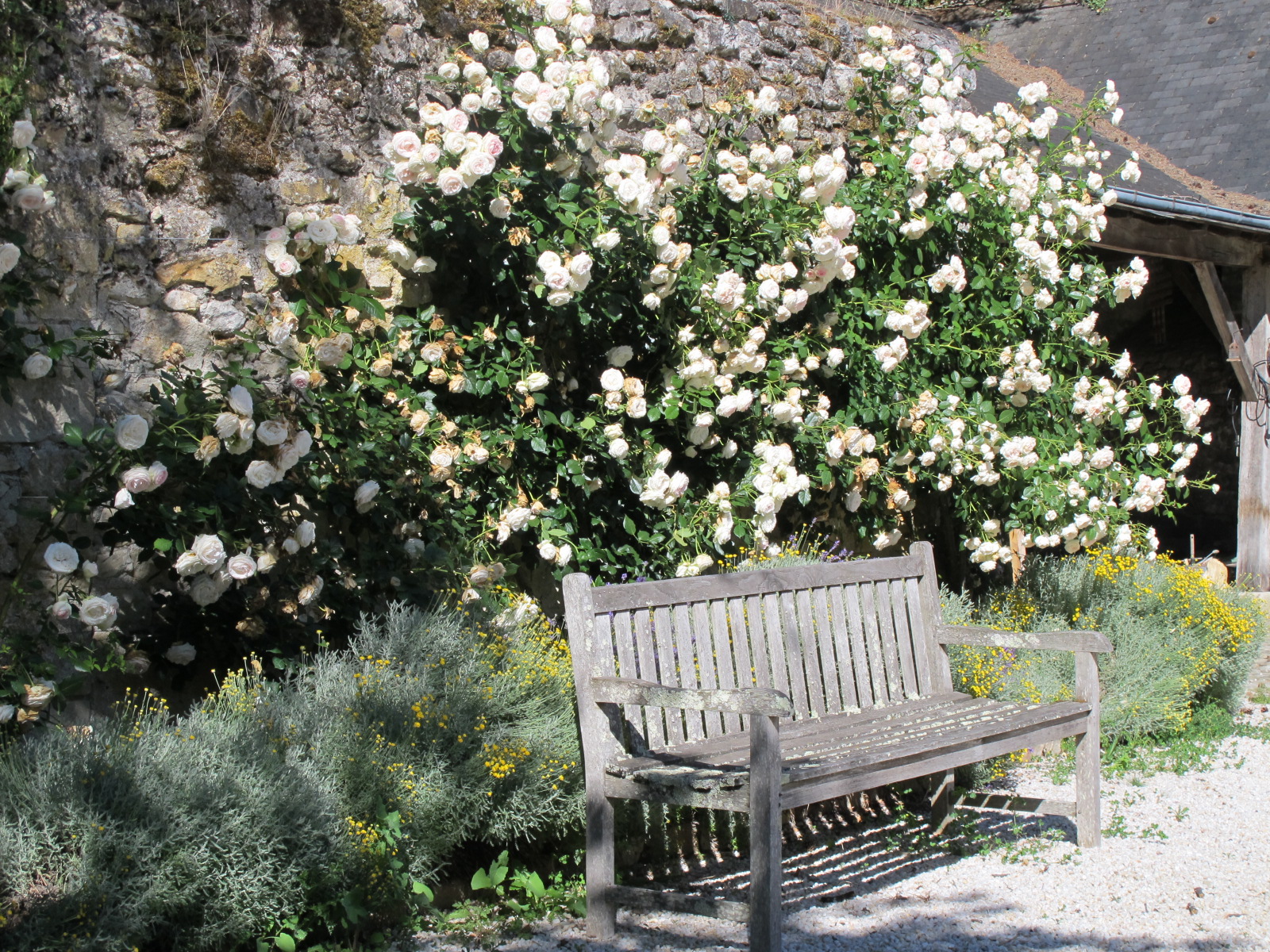 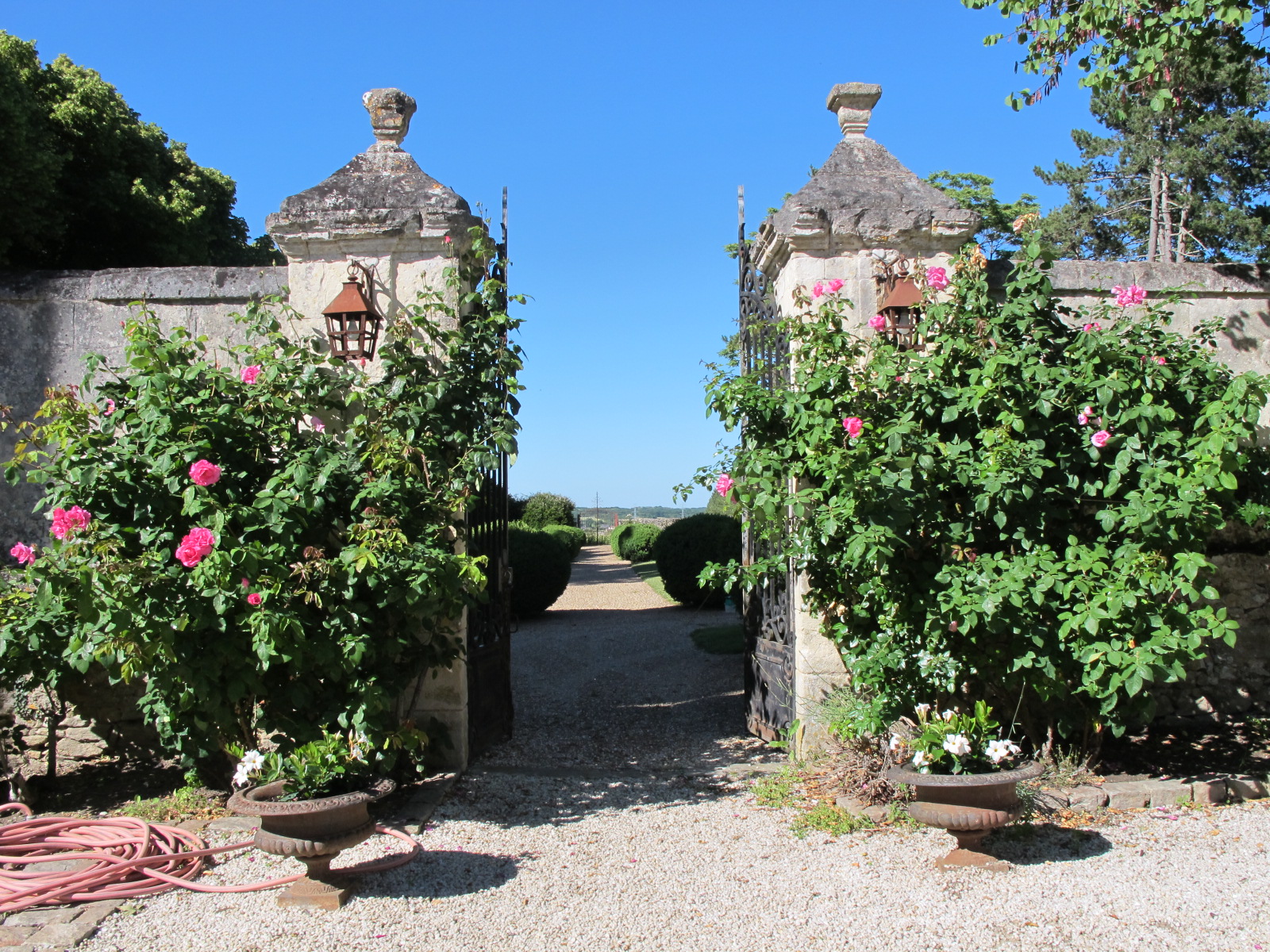 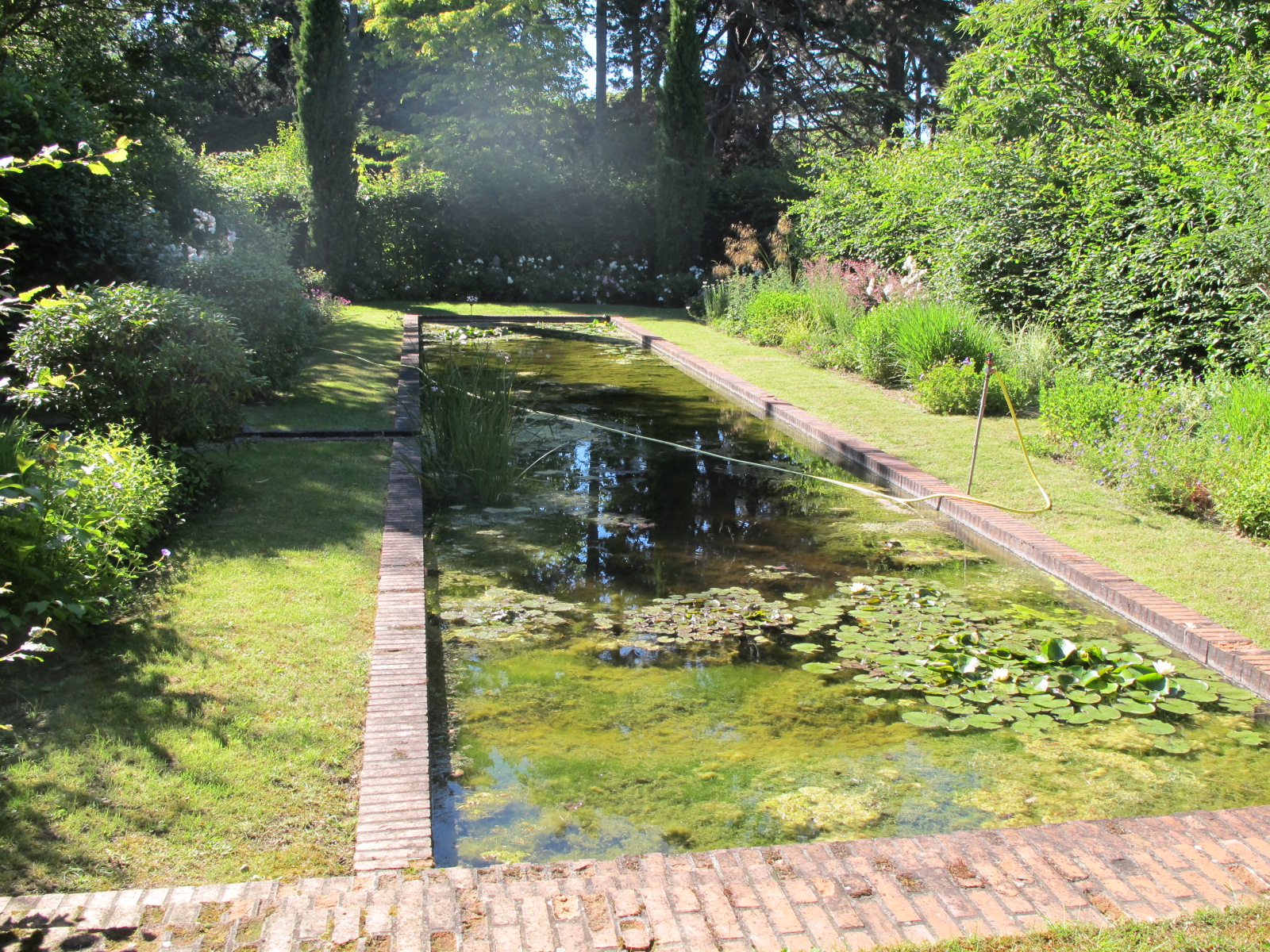 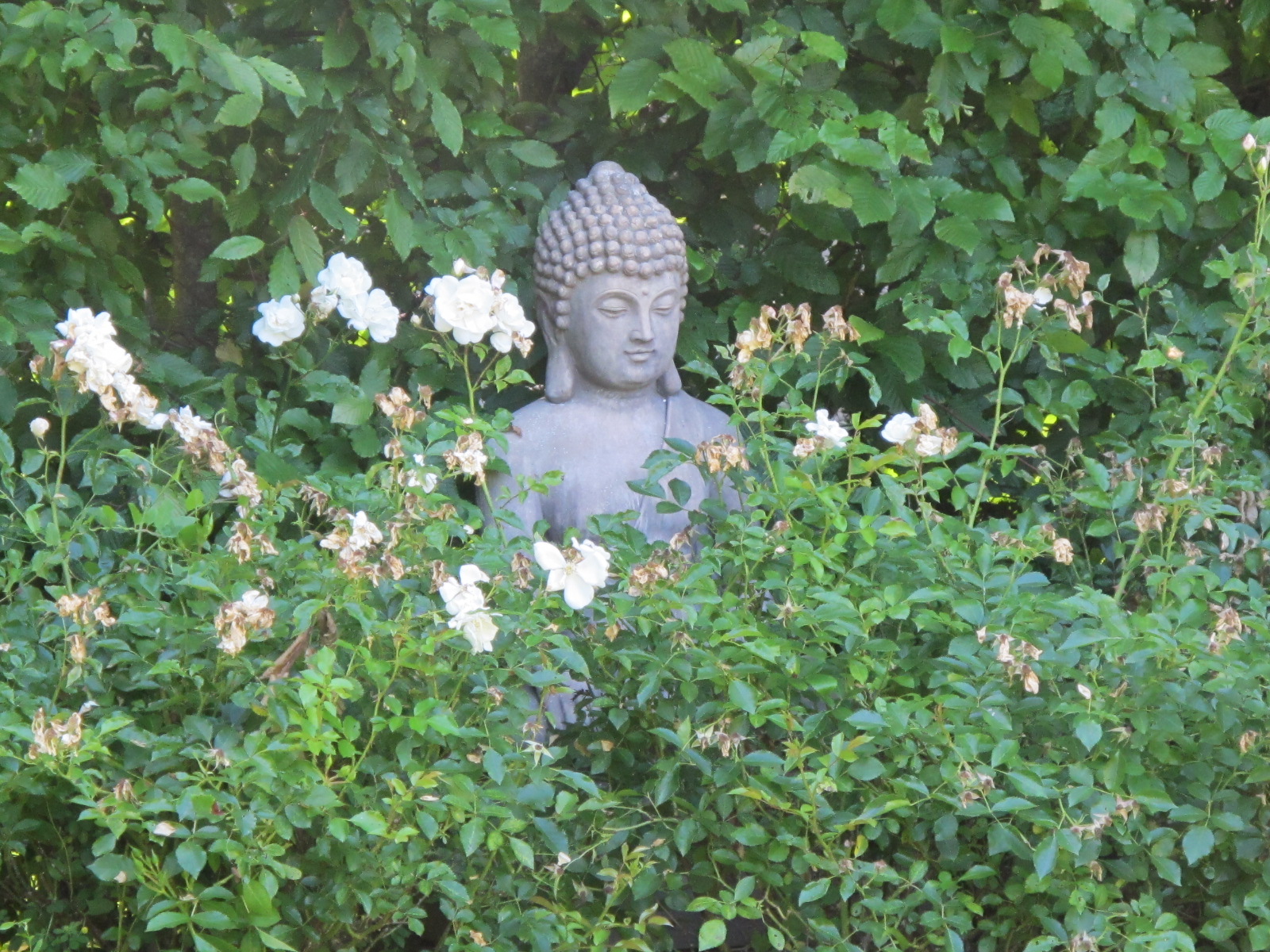 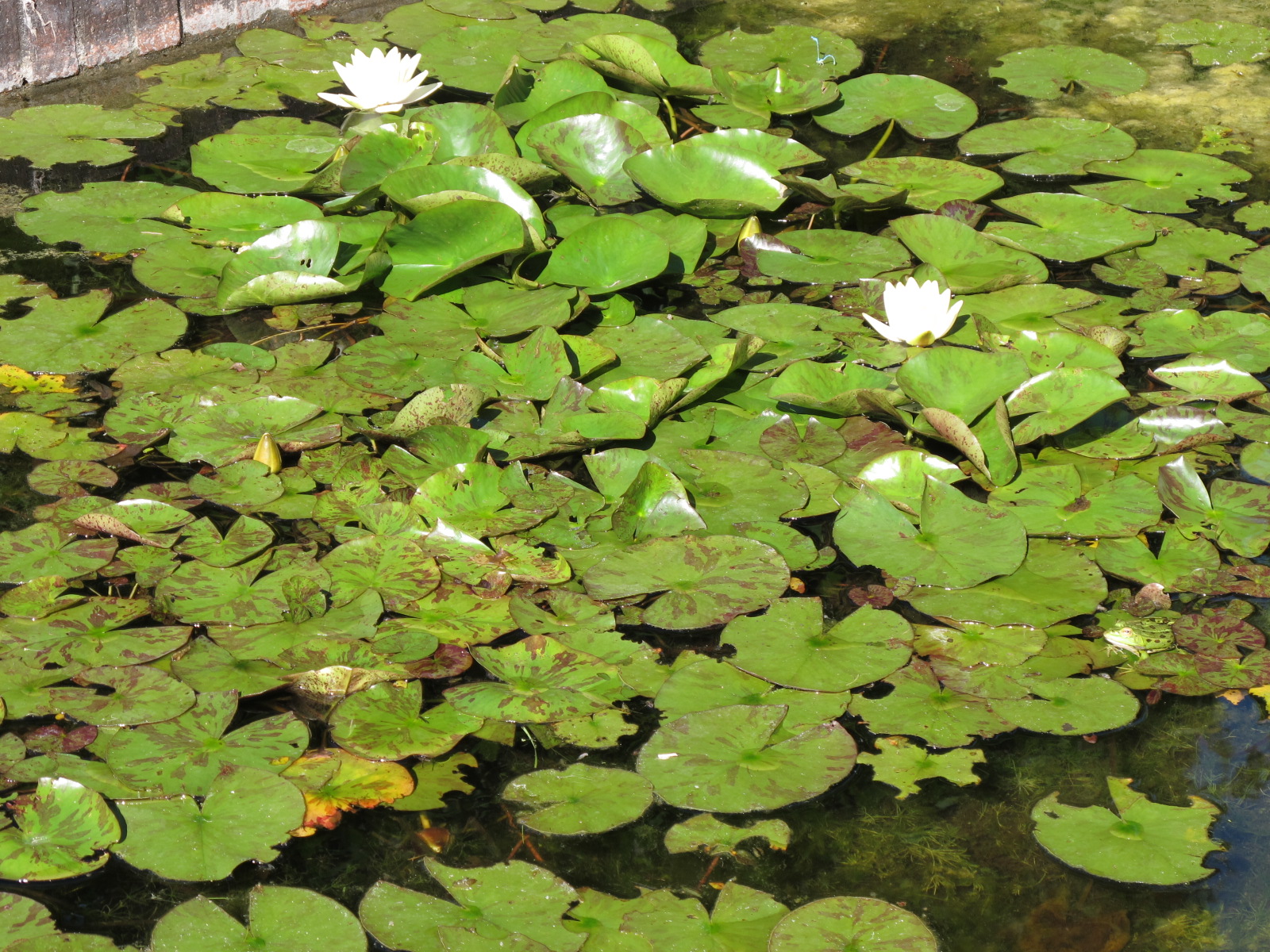 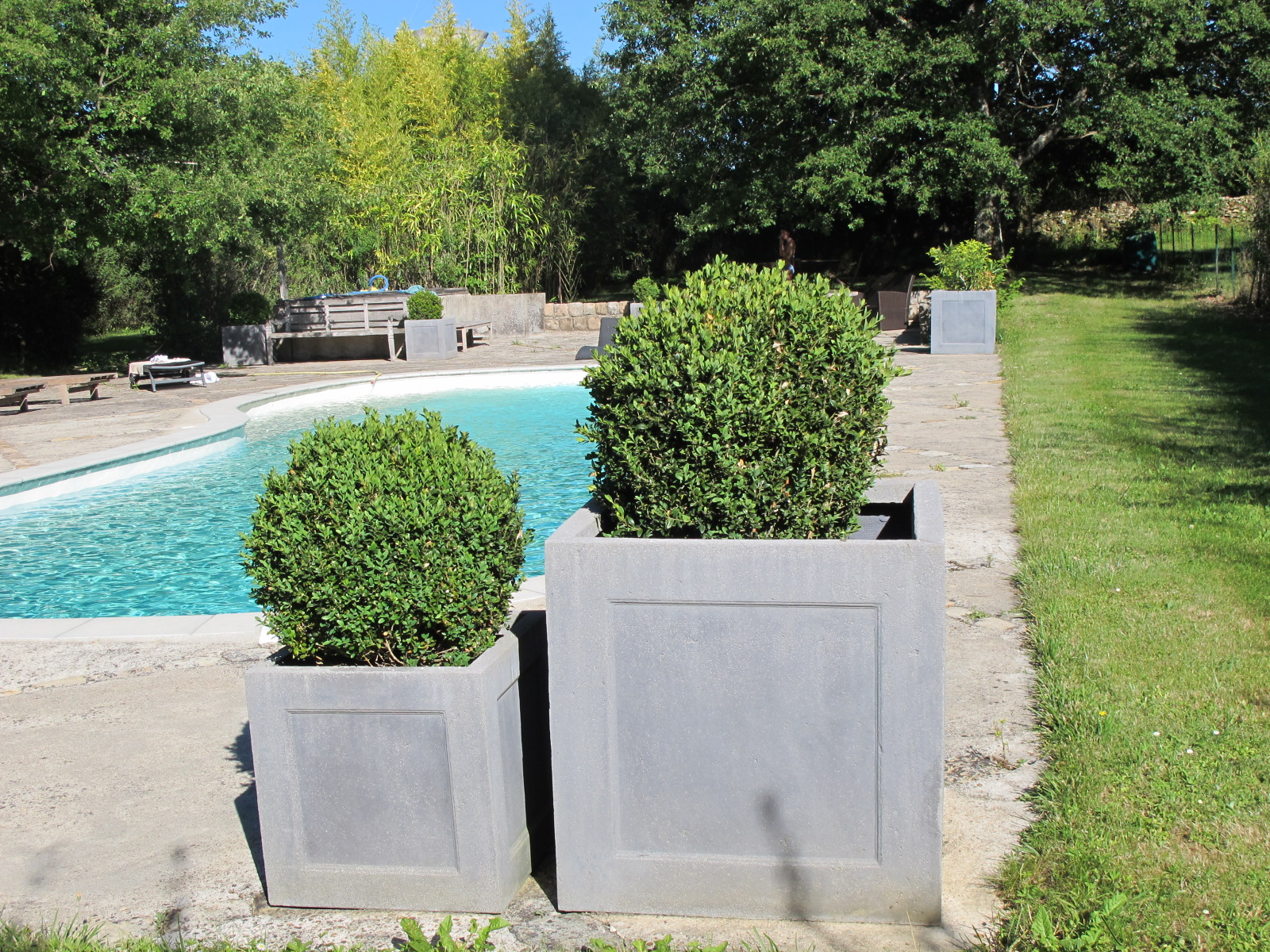 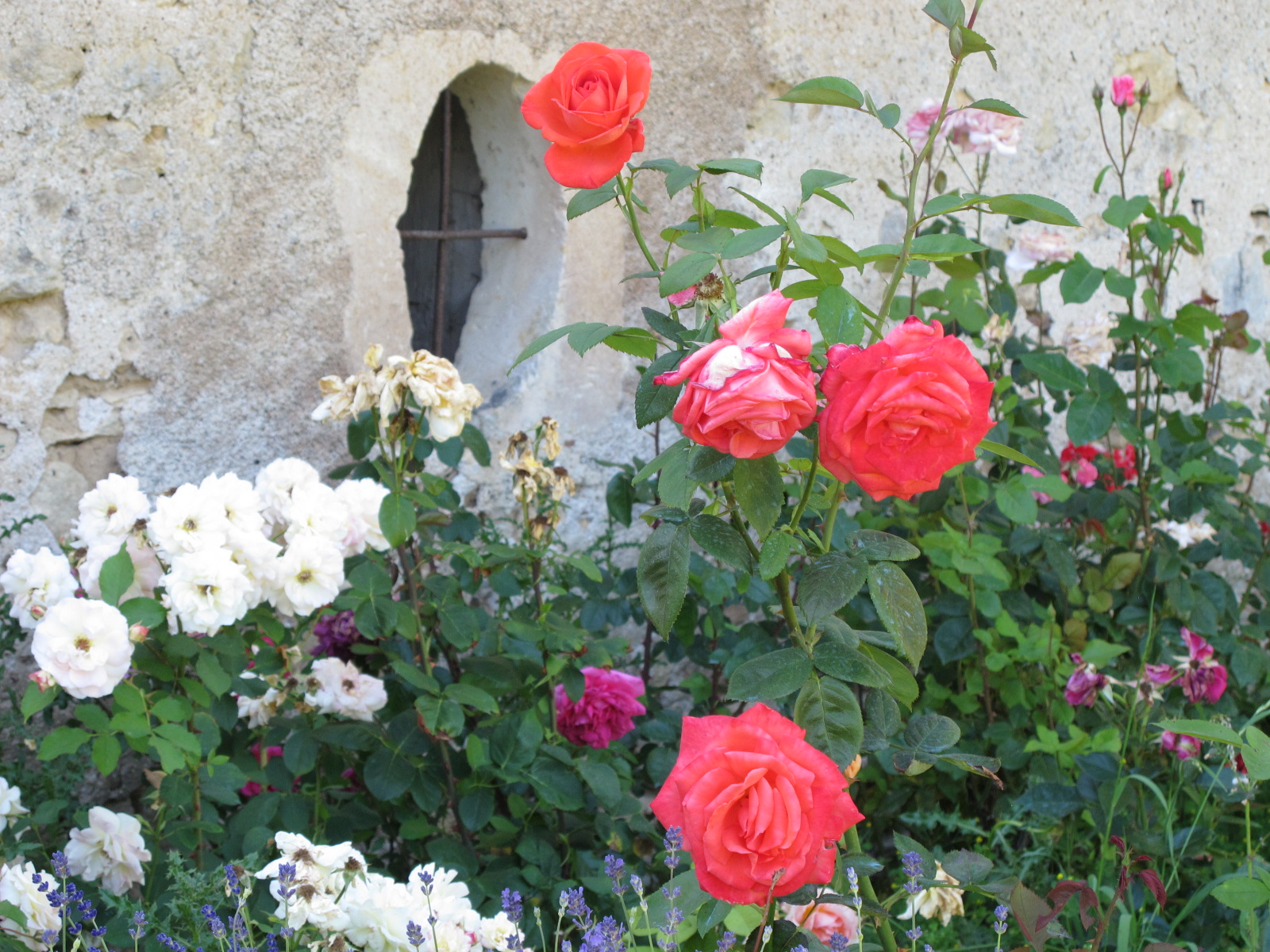 Several gardens surrounding the castle have been created or restored in recent years. The French garden, created in the 17th century, was once entirely walled.

The Alexander Garden is a place of meditation with a long pool and a fountain. This secret garden, enclosed by a bower, is dedicated to a 10 year old boy who disappeared in the 2004 tsunami.

A vegetable garden, like those of the Middle Ages, is made up of squares of vegetables and medicinal plants. The Olive Garden is overflowing with white roses and lavender.

Not forgetting the “jardin d’Houx”, “Doux”

The owners of the château, in association with friends who are passionate about wine, have saved a vineyard situated on the slopes of the Indre river, with certain parcels of Chenin extending in front of the château.

The vines are cultivated with respect for the earth, in accordance with the principles of organic and biodynamic agriculture: working the soil to obtain living terroirs; cultivating the vines with the aim of helping them to develop their self-defence capacities.

The Domaine du Haut Baigneux produces very elegant and racy white wines as well as fruity and light red wines, which bear the typicity of their terroir.

Loire wine is a present, which takes all its time, past and future, on the slopes of Azay-le-Rideau.

Chenin Blanc: a full-bodied wine with a bright, pale gold colour and aromas of white fruit and flowers.

Rosé Franc: made from direct pressing of Cabernet Franc grapes, this is a dry wine with a clear colour, deep, aromatic and fine.

Advice from Pierre and Geneviève

GO FOR A WALK

Walk in the forest around the castle on the banks of the 3 rivers (Indre, Cher and Vienne) or the Loire, or in the vineyards of Grolleau, Chenin or Cabernet

ON THE BANKS OF THE LOIRE

TREAT YOURSELF IN CHINON

Petting the 2 donkeys Zadig and Manga, the horse Milord and Hola the Australian shepherd dog

Canoeing down the Vienne between Chinon and Saumur, the Indre between Azay-Le-Rideau and Montsoreau, or the Loire between Bréhémont and Saumur

« It’s a whole story that we discover along the way… »

Moving from Balzac’s house to Calder’s workshop in Saché

Enjoy a local dish in Crissay at the foot of the fortress, facing the Manse valley.

Spend the day at Fontevraud Abbey where Richard the Lionheart, Henry II, Eleanor of Aquitaine and Isabella of Angouleme are buried

Walk in the castle gardens, and meditate in the Alexander garden.

To book the Manor or simply to visit the gardens, please contact us via this form.

THE VISIT OF THE CASTLE, THE MANOR AND THE GARDENS

The Château de la Cour au Berruyer, listed in the supplementary inventory of historical monuments, and the Manor House, listed as a historical monument, are open to the public on weekdays from 10am to 12pm and from 2pm to 6pm in July and September.

Open on 14 July and during the Heritage Days.

Due to the Covid-19 pandemic, visits are by appointment only.

Access to the parts of the building that are of artistic interest: listed manor house, forecourt and Châtelet, Cour d’Honneur du Château, gardens.

PARTICIPATION IN THE COSTS OF THE VISIT